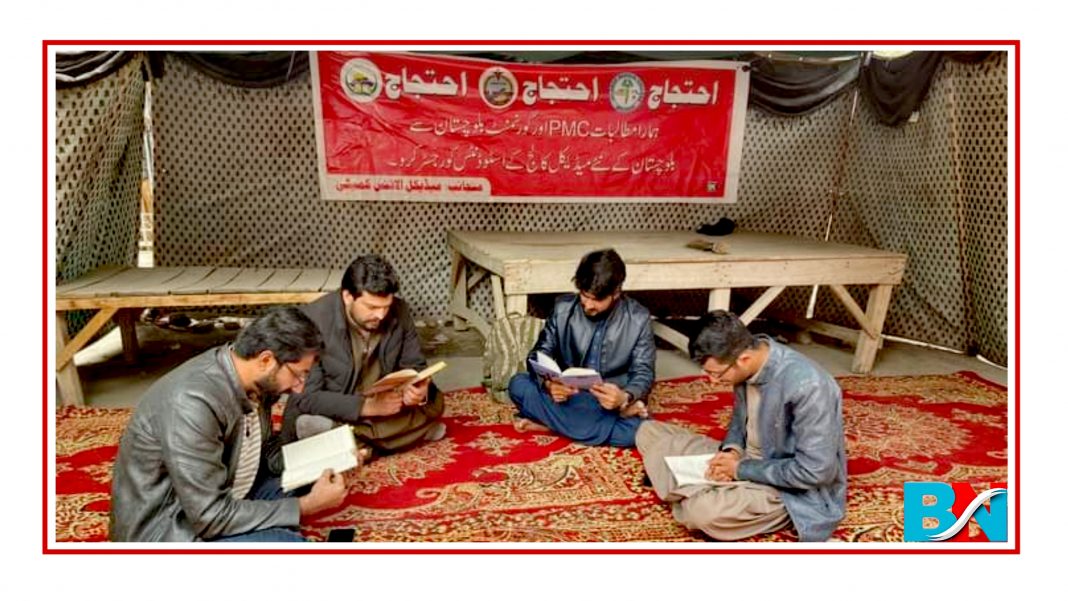 The students of three various medical colleges of Balochistan have completed their 67th consecutive day in their protesting sit-in outside Quetta press club on Wednesday (Feb 9). They complain of the light attitude of the government, opposition, Pakistan Medical Commission (PMC) and the federal government towards the resolution of their issue. In a recent press conference by the Medical Alliance Committee, they have announced to bring intensity in their protest by going for a hunger strike till death if their demand is not met within a week.

It merits to be mentioned here that the three colleges – established in 2018 – have batches of fourth year who have passed the medical entry tests as well. They have been studying in the colleges for last four years. However, in March 2021, PMC issued a notification of the “special test”. After receiving several resistances in March, the matter disappeared. A team was sent to the three medical colleges who found the hospitals satisfactory. But instead of registering the colleges, on Nov 26, they issued another statement asking for a special test with the same policy of dropping out the students.

The students held numerous peaceful walks within their college campuses, press clubs and chowks, but PMC stayed on its decision. They found Quetta the sole place where they found to raise their voices to be heard. They came in Quetta on Dec 3 where they camped outside Quetta press club which is continued till today. They were left ignored in first days but, later on, opposition and other political parties approached them and showed sympathy while decrying the government. “The opposition was never with us on practical grounds, but only needed an opportunity to lash out their anger at the ruling party,” said the students.

Looking at the protesting students, Chief Minister of Balochistan, Mir Abdul Quddos Bezanjo called on the students in the CM house along with provincial minister for health, Ehsan Shah and health secretary on Jan 8. He listened to their grievances and said that they were true and legal towards their demand. While criticizing the federal department, he said that such a test was the infringement of the rights of the students of Balochistan. He added that they needed doctors for the welfare of the province. At the end of their meeting, CM ensured them of “cancellation of the test” within fifteen days and asked the students to wind up their protest. “We were never to stand up before we received the cancellation letter,” the students said showing disbelief in the promise of CM. “As expected, it has been more than a month, but the test is yet not postponed.”

In their press conference, Medical Alliance Committee said that the students of the given colleges secured admissions in their colleges through proper channel by passing MD-CAT. They questioned PMC that if they were to conduct a separate test, why they were asked for MD-CAT which is the functional way of the admission of medical students. They condemned the rude attitude of PMC towards the students of Balochistan saying that it was a grave concern asking the qualified candidates to retake a test for securing their admissions when the students are in the last year of their degree. “We have never seen such a policy anywhere in the world where students were asked to take a test in the last year of their degree,” they criticized the policy of PMC.