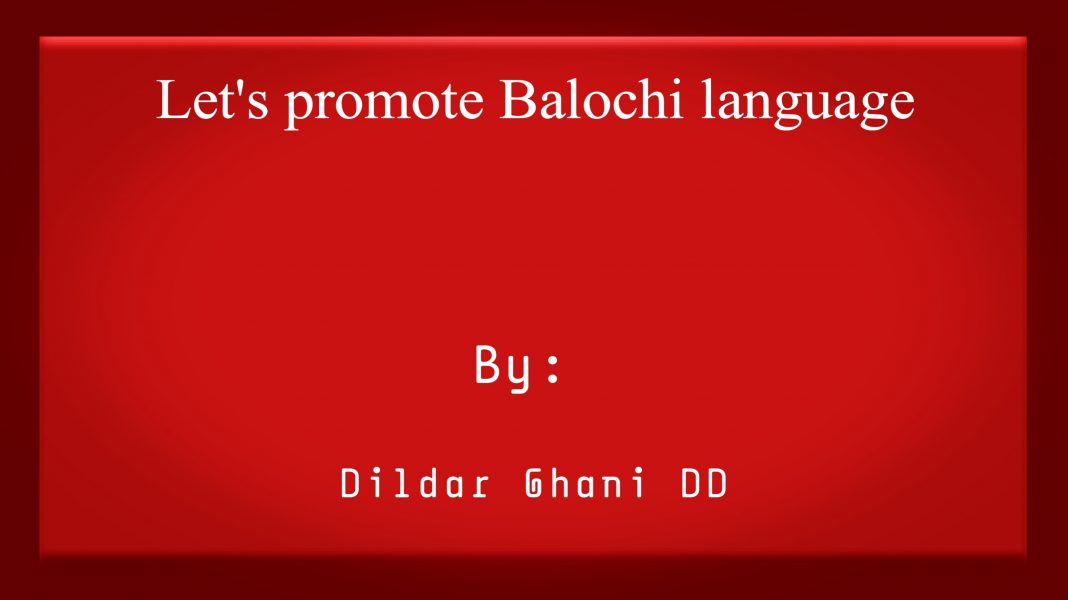 Balochi, an ancient language, is spoken by the Baloch in most parts of Balochistan. The language has a well-known history as our ancestors adore the language more than themselves. So do we. The people who speak the language reside in different regions, like Southeastern Iran, Southwestern Pakistan, Southwestern Afghanistan, gulf countries and other European countries.

Balochi language is thought to be evolved between 200-700 BC. Having a well-known history and a vast importance, the language is getting less importance because the young generation is keeping its worth aside.

It makes me feel proud to be a Baloch and speak the very rich Balochi language. Nevertheless, Baloch and Balochi are my real identity. Our culture is rich with transitional stuffs and all man-made crafts are adored by everyone around the world.

The same thing is occurring in our Baloch Nation where the people are not realizing and putting every possible energy to use other languages like, English, Urdu, Arabi, etc.

The language is not included in our educational curriculum. Baloch students are deprived of getting wisdom about their native language. It is the initial stage where the concept of new generation is getting drawn.

The present generation is not doing any sort of favor for themselves to give a powerful stance to Balochi language.

On the other hand, the concerned institutions are not serious towards forming a proper grammar of Balochi. Regardlessly, the more Baloch neglect their own language, the more they lose their identification.

The first objective of our literary philosophers is to promote the language. It has been a trend that everyone who gets educated forgets his responsibilities. Promoting the language is one of the basic libalities of us as Baloch. It shall be concerned seriously.

To sum up, we have to know the value of our language. All those developed countries are live examples who have gained prosperity after they worked on their own language in the beginning. Secondly, literary programs must be conducted in educational institutions where the importance of Balochi language must be the mainstreamed subject. If we do not take strong steps for the promotion of Balochi language today, we would likely to have more regrets in the coming time. Hence, every Baloch is to know the value of their language and promote it globally.