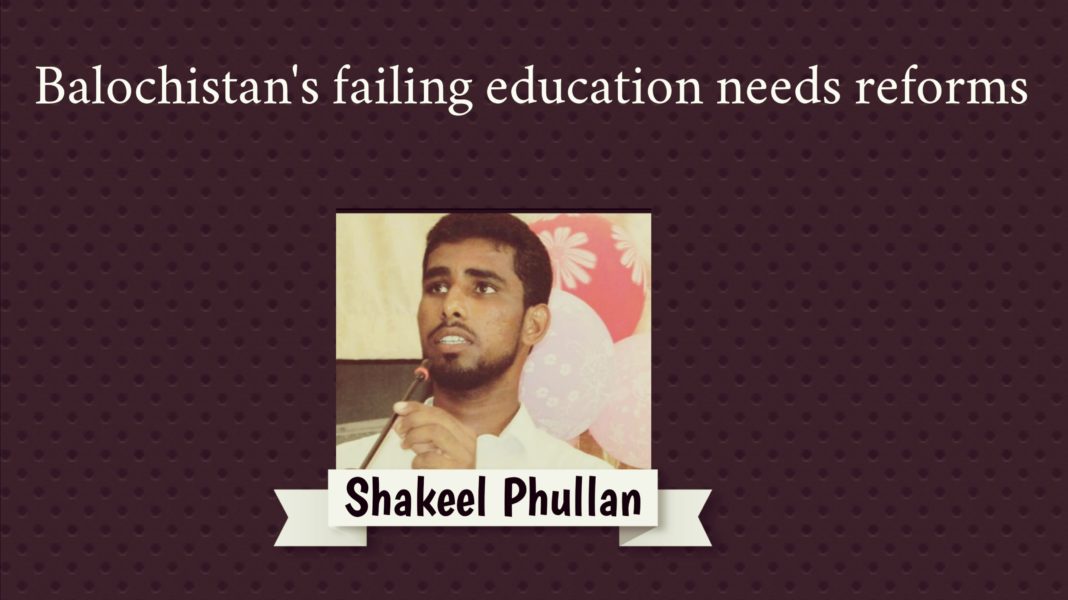 Balochistan’s failing education is alarming. Shockingly, the extremely worsening educational circumstances of the province have snatched the attentions and concentrations of Baloch students on focusing more on their studies.

Balochistan, the resource-rich province of Pakistan constitutes 44% of the country’s territory, is pushed and ignored the most in entire spheres. Particularly, its educational and healthcare sectors have remained worst in current situations.

Balochistan’s education system has shown up its worst phase with up to 11,000 primary schools in the province lacking fundamental necessities. Simultaneously, more than a million of children are out-of-schools till date.

Reportedly, the painful angle of the current state-of-affairs is that most of the out-of-school children are girls. As per an estimation, 62% of girls aged between 5-16 are away from institutional education. Coming to the opposite gender, Balochistan’s 34% male children are entirely deprived from education.

Education is the fundamental right granted by our own constitution in order to brighten the country’s future. Yet the province is plagued with issues as a lack of proper infrastructure in the schools. Even, most of the buildings need entire reconstructions.

On the other hand, the issue of ghost teachers is a major concern. They do pack their pockets with salaries but without giving duties.

Khuddan, a village in Tesile Dasht, waits for reconstruction of broken school’s building. Sadly, the ghost teachers have successfully done their replacements with college’s students by paying them a little amount of money. Resultantly, the ratio of out of school children is increasing regularly.

Kassak village, somewhat 19 kilometers away to the east of Turbat, has only the metric school’s building without the appointment of teachers so far. Whereas, the primary section has just three teachers who cannot manage to attend the complete periods.

A great many rural students have gotten disappointed and left their studies after completion of their primary education.

Observing the current education of rural areas of Balochistan, the province is soon going to have a great part of their generation as illiterates. The province has to bear inestimable loss in the near future if the pathetic education continues.

Even currently, apart from out-of-school students in Balochistan, the enrolled ones are totally disturbed and pressurized due to stoppage of some study-related resources. They were the sources to acquire education and knowledge in the region, especially in Turbat.

Although the city is positioned Balochistan’s second biggest city but it lacks the required sources for continuation of a systematic education. As the city has been undergoing from unavailability of internet and unsystemic rules and regulations.

Internet is one of the key sources for students to get help in their education. But no one pays heed on how much such unavailability affect the education of the youths.

Living in the 21st century, the real advancement and changes are lost in our society. Here nobody appears for inviting changes and developments for the state.

It is high time Balochistan’s education is improved. The government needs to take some urgent measures to work on building a quality education. Otherwise, we are going to get into greater perish.