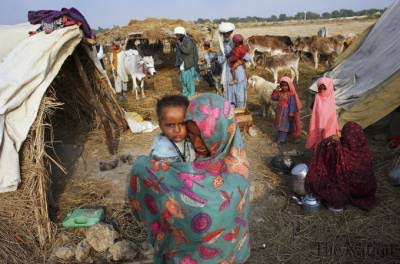 Balochistan, the richest province of Pakistan, shockingly, is facing the days of having witnessed the worst standard of living in the twenty-first century.

In an era, where electricity, gas, health, education etc are deemed the basic requirements of a simple living, Balochs are spending lives far deep in mountains unaware of the outer world of luxuries. Causes of migrating towards the mountains were the livestock they owned in the ancient period for they required a good amount of water for their better growth which was lacked inside the cities in past. Million of Balochs are yet not censused in rural Balochistan for no one owns any idea if there exists any population there in mountains neither anyone of us has ever happened to have a research in these nearby mountains for reporting to the people.

Unfortunately, a group of living individuals in the owned territory go missing in the census of a country and no one is in the known; seems very astonishing. When I rushed towards the mountains for having sometimes off my study and having had a gathering with colleagues, I witnessed them, unlike us they had no greed of having availed the basic necessities for they were unaware of any fundamental right but concerned about their food solely. Is it a great negligence by the local body or their inclusion was another collision to the existence of Baloch and Balochistan? When we have our footsteps to the doors of our government, they often make the excuse of considering them unregistered but may we know who is authorized to make them registered in the pages of Pakistan? Yet our questions are unanswered and they may go missing like the rest of the years they have had gone missing.

Unlikely, the government throws back the unregistered residents of the province in the list of terrorists or migratory from the neighboring countries through illegal sources. May they are permitted to settle down but they go neglected in every regard; education, health, citizenship, gas, electricity and many more. They keep knocking the doors of reachable heads of government for justifying them as the residents of the same territory far long the country had come into existence but again, we are a country of corruption and ill-governance. As once I came up with a status fixed for Pakistan in Urdu (Idhar Paisa bolta hai “Here money talks”). Because from these people, if someone accomplishes to have a little money to make their passports or identity cards of Pakistan illegally, they get to settle permanently in the Urban areas. But what about million more there in the mountains living life like dogs and strangers in their own territory? They, too, want to have a good life like the rest of the country is spending but just because they lack money, they go unnoticed.

Surprisingly, Balochistan, the center of notice these days specifically because of China Pakistan Economic Corridor (CPEC), left missing in the category of researches in various parts for bringing improvements. Sadly, here general researchers do come but ignore the people with no proper clothes to wear and dirty bodies. Living in mountains for more than one hundred years, hardly availing water for their livestock, meandering the entire day around the mountains, having seen no food to eat in most of the days, how come they be like an elite? Why don’t the researchers notice these people’s backgrounds before having their condition finalized of making their dilemmas written once clean entirely? If they had the power to have themselves cleaned, they would have never needed anyone to take their requests to the higher authorities.

Finally, the people in the rural Balochistan have faced enough challenges and dilemmas in their lives. For when will we neglect and silence the voices in our own territory? They also need to have the same rights as given to someone living in Lahore or Islamabad for we are also the citizens of the same country as they are. Reforms are to be brought here in the living standard of rural Balochistan. The newly elected Chief Minister of Balochistan Mr. Jam Kamal is requested to have a meeting with the Prime Minister Mr. Imran Khan for having some sorts of basic changes in the lives here in the province. Everyone must be equal before the law in every field of life in every part of the state.