Home Latest News Tribute to the Girls of valor, courage and bravery of QAU 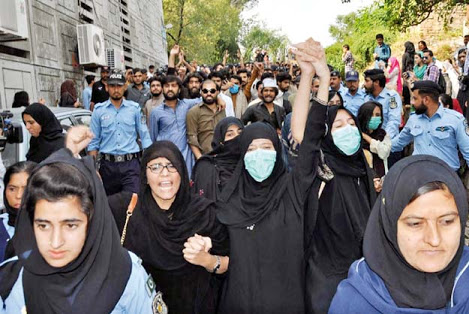 This post is to pay the highest tribute to the heroic girls of Quaid-i-Azam University on 23rd October, Monday in a protest against the brutality and violence against the Baloch and Pashtun students who stood firm like mountain to protect their brethren from the heavily deployed police force and its wrath.

I’m speechless and don’t have words to describe their endless heroism, courage, fight they put and valor they shown on that day. The powerfulness, fearlessness and virtues of courage surpassed every spectator both boys and girls in the campus. You have shown that a girl’s courage can match anything and this is the century she will fight for her rights in any conditions.

You have set an example even in the face of insensitivity, selfishness and cowardice and In Anna Funder words “they were brave and strong and broken all at once.”

I recall when the police put the students in the vain, and you fought so bravely that you put all the other students to shame. History will remember you “Like a bird singing in the rain, let grateful memories survive in time of sorrow.”