Home Articles The Grave Dilemma of Women Education in Balochistan 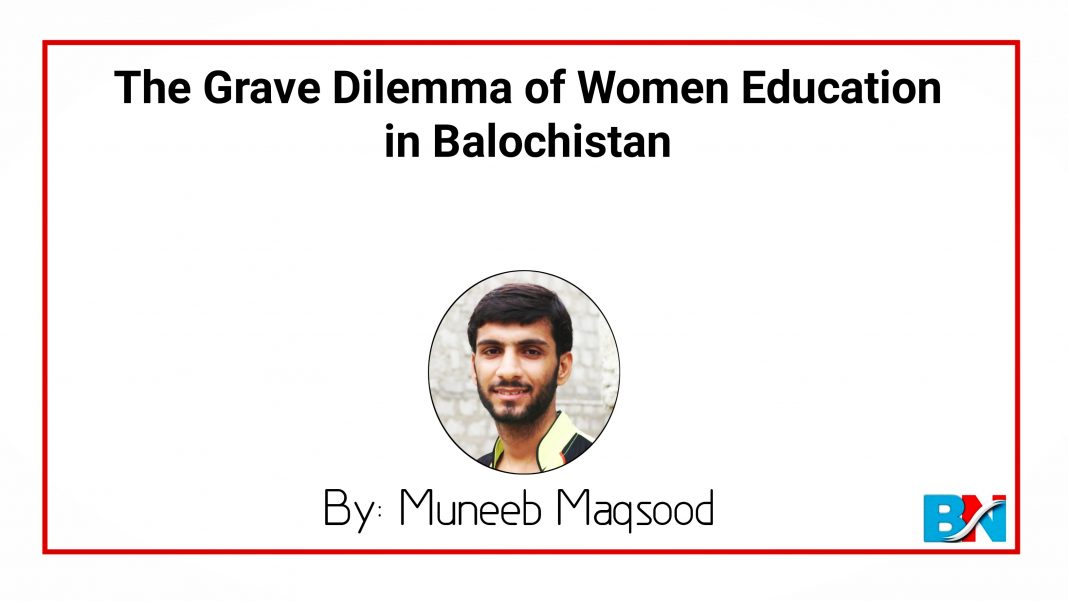 Scientifically, women have a better mental condition (of understanding the taught things in institutions) than that of men. But they have been ignored in one or the other way in the whole world. In Balochistan, they are, to a great extent, struggling for their fundamental rights. Because gender discrimination is very common in this part of the world; men can roam anywhere in the world, but females are caged; men can freely get education, but women have to fight with their families and convince them; men are asked for women’s decisions; etc.

According to the report of UNICEF Pakistan, Balochistan’s only 23 percent women go to schools as compared to men’s literacy rate of 33 percent (making it 28 percent overall for Balochistan). It was 41 percent before the global pandemic Corona Virus interfered into the educational set up of the country in general, Balochistan in particular.

Mostly, in Dera Bugti and Panjgur districts of Balochistan, women are left out of schools by religious extremists who completely avoid educating women. Institutions with co-education were targeted and threatened to be closed completely. Even though, a school van was burnt on its way to school, and then they [the extremists] attacked on the given school. After this incident, the school remained closed for a couple of years.

Similarly, rural areas of Balochistan are also facing some similar problems. In most villages, a large number of women are not attending classes due to lack of schools for women. However, one can find schools but at long distances which make it tough for the women to attend them on a regular basis.

Disappointingly, most families in Balochistan are suffering from severe poverty. After working very hard, they rarely get two times of food. Amidst such circumstances, it becomes hard for families to hire transportation to send their children to schools. Hence, they make it quit for their children to going to schools.

Secondly, some families in remote areas already have the perception that education is not for women, but merely men. Women are completely banned from going to schools. Besides this, their parents engage them in very early ages. When they are to be given pens, toys and dolls, they are thrown at the bridal dresses and wedded off.

One wonders, we are living in a country where laws have no validity. To prove their competency, the current government (of Balochistan) needs to step forward to curbing educational woes for women in Balochistan. It becomes an ultimate watch as to how the government in rule deals with women education in the region.