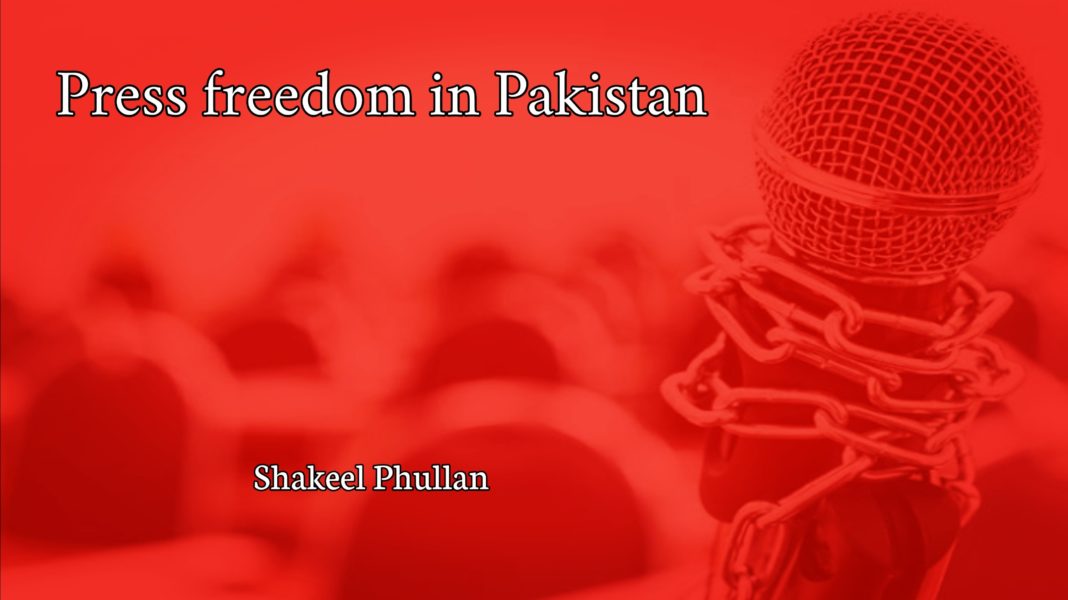 Journalism is a profession of writing, editing, aggregating, highlighting issues and presenting news reports, articles for widespread distributions, typically publications for informing the people about the globe. Certainly, the journalists play an astonishing role for highlighting the issues with provision of awareness to everyone in the entire country and the globe for the things that happen.

The trade of journalism has to be promoted and valued in Pakistan in order to know the actual faults and weaknesses which have stopped the state’s development. However, the responsibilities of journalists are to highlight the issues with realities for bringing the culture of equality, justice, peace, honesty and etc for protection of human’s rights. We have to know their worth and encourage them to precede the struggle for a brightened future.

They are the knowledge-providers whose aim is to spread awareness for eradication of corruption, dishonesty, discrimination, inequality and several others which are pushing the country towards backwardness. In fact, numerous students have interests in journalism field, but they get disappointments when they come to know the unbearable situation of the journalists who are unprotected, being threatened and killed in Pakistan.

Reportedly, Pakistan is considered one of the most dangerous countries in the globe to be a journalist. It ranked 142nd out of 180 countries in the 2019 RSF Press Freedom Index. The journalists are entirely in danger in the state. They are receiving multiple warnings and being threatened not to show the real pictures. They are helpless and not being safeguarded by government. Majority of journalists are being attacked by unknown gunmen, and mostly their killers go unpunished in Pakistan.

Sajid Hussain, the editor-in-chief of Balochistan Times, was abducted from Uppsala, a Swedish city, on 2nd March and later his dead body was found from a river there. The Baloch journalist (Sajid Hussain) was warned and threatened; however, he left Pakistan in 2012 and had been living as a refugee in Sweden. He was always in search for truth and raised voice against the injustice and unlawful acts which have snitched the legal rights of the people in Balochistan.

As living in a democratic state, everyone has gotten the liberty to speak up for his/her fundamental rights to live peacefully. Sajid Hussain, too, lived in a democratic state and he should have been listened to and protected instead of forcing him to migrate later disappearance and killed.

In February 2020, a report was published on killing another journalist, also a local leader of PML-N (Javedullah Khan) who was attacked by unidentified attackers in Shakardara area in Swat. Though a police guard who was with him remained unharmed, but failed to protect the journalist from attackers.

A great number of journalists in Pakistan have been warned and killed by unknown gunmen; the country seems a gloomy room for the journalists to survive.

So, what seems good is a liberal constitution if that is failed to secure the most basic of whole liberties; the liberty of person/journalists. When the Law came into being for the protection of journalists, numerous guilty minds have been utilizing it to derive their personal advantages including stopping the progression of the State and threatening the journalists to end up speaking the truths.

As most of the people involved in public life in Pakistan still live in the extreme fear of getting arrested and detention_ even if they are completely innocent and have done no harm to anyone. The country where we live in is not known for its justice yet_ specially when it comes to the journalists.

So, the journalists need justice, peace, equality and protection in order to carry up their profession of writing and highlighting the problems of the country. Strict actions should be taken against those who are involved in unlawful activities with making the country the worst place to live for the Journalists and common people. There should be an end of violences, cruelties and threats for them to survive peacefully in Pakistan.