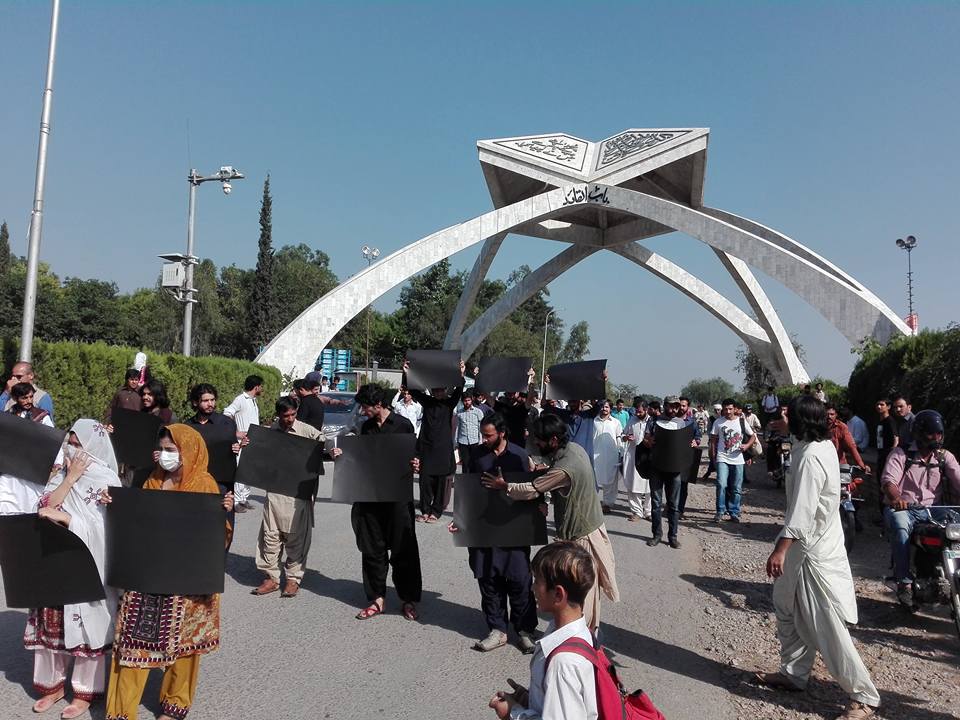 The written pages of history suggest us the fact that being in minority and standing on the ground for rights needs high level of commitment and passion for sacrifice.

Now it has been almost a month that the Baloch and Pashtoon students of Quaid i Azam University are on a peaceful strike for the restoration of expelled Baloch students.

The total number of Baloch students in the university is around forty as they have been allocated only six percent of quota and within this many of students from Punjab having the domicile of Balochistan get the seats.

In every university clashes among the students groups are a common phenomenon and university administration usually fines the students involved in creating disturbance in the university. However, when case comes to the oppressed and minority, the charges and actions against them get harsh.

Many of students from the same university have been fined or expelled, but were immediately restored because they had the majority in the varsity. Baloch are mostly blamed that they give everything an ethnic dimension and try to create national disintegration among the students. Why shouldn’t they do this? The number of students in the university is in thousands, but the protesting students are just Baloch and Pashtoon.

After the clash between Baloch and Sindhi students in May, the Baloch students trialed every legal and democratic approaches to get justice, but justice was denied to them by the university and the court.

One thing needs to be noted that university administration, police, provost and the register of the university have agreed that in the fight Baloch were in a defensive position.

Previously when a minor clash occurred between Baloch and Sindhi students, the administration along with police agreed to the point that if any action against Baloch is taken then the Baloch students have the legal right to defend themselves.

The time when Sindhi students called their General Body meeting and decided to attack the Baloch students, Baloch Council Chairman immediately approached the police, provost and security officer to control the situation, but none of them bothered to step forward and after some times, the Mehran Council did what was expected.

The FIR filed by registrar of the university, clearly shows and explains that the Baloch students were in a defensive position and were on legal ground.

It was promised that the protest would continue till acceptance of thirteen demands, but after eighteen days of the strikes, QSF stepped back and left the Baloch all alone thinking that Baloch will also step back as they are less in number and may not be able enough to proceed the strike effectively, but Baloch students refused to step back and remained on the ground for their rights.

None of the councils moved forward in support of Baloch students. However, some of the Pashtoon students stood firm with the striking Baloch students which the Baloch really needed. After few days Pashtoon Council officially announced to become the part of caravan which was a surprise for the QSF.

Actually the Baloch students knew this fact from the very beginning that except Pashtoon, no one will come in support of them.

The Baloch-Pashtoon unity will mark history as they have stood on the ground despite being beaten and dragged into police custody. It is a state of shame for the other students and councils who have remained silent in this critical situation.