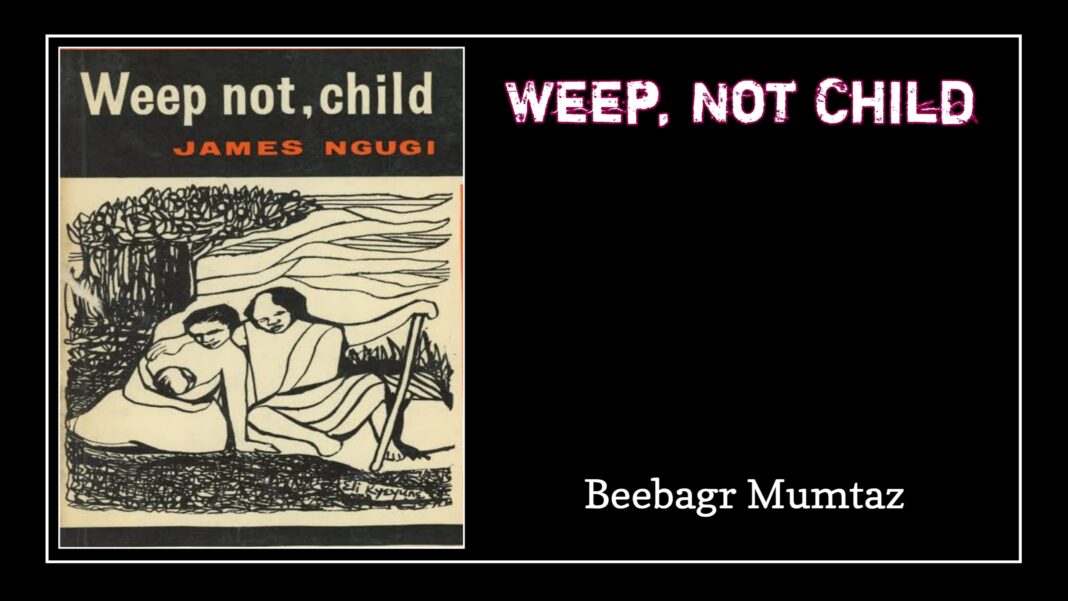 Ngugi wa Thiong’o, a novelist, short story and non-fiction writer, was born on January 5, 1938 in Kamirithu, Kenya. His original name is James Thiong’o. He began writing while he was a university student and has published more than 40 books until now. His famous works include ‘Weep not, child’, ‘The trail of Dedan Kimathi’, ‘Decolonization of the mind’ and many more. Ngugi denounced writing in English, Christianity and his name James Ngugi as colonialist products.

‘Weep not, child’ is the first English novel that got published in Eastern Africa. The story is set in Kenya of 1950s to late 1960s when she remained a colony of Britain. The whites took over the lands of the Kenyans and forced them to work under their reign. The Blacks felt it was injustice to them and they, therefore, formed an organization namely K.A.U (the Kenyan African Union) in 1944 in order to secure equal positions in the government. The purpose of the organization was to eradicate the difference between Black and White on Kenyan land. Jomo Kenyatta became the president of K.A.U and he was the hope of Kenyan people. People believed he could bring reforms through his experiences that he had gained in England. However, the British rulers denied the rules and sets of the organization and gave them nothing but sufferings. They imprisoned many members of K.A.U and prevented it working for its people. In addition, it was a time when the Kenyans thought that the English people were unlikely to have peace with them, so they formed another organization in 1951. The organization was called “Kenyan Land and Freedom Army” or “Mau Mau”. Most of its members were from K.A.U and were men who fought alongside British in World War II. They fought for the freedom of their country which they believed was unstable during British reign. The members of Mau Mau killed British men and Kenyan chiefs who supported the colonial government. One of the well know chief, Waruhiu, got killed by them in 1952. In the same year, the situation of the country worsened. The government arrested and killed many members of the K.A.U. They arrested Jomo Kenyatta and imprisoned him for being a member of Mau Mau even though they could never prove this allegation. People felt unsafe in their huts hence, they decided to join Mau Mau in the thick forests of Kenya to fight for the freedom of their country. They took oaths and proved themselves honest and true fighters for the nation. Anyone who was found against the oath was killed by the members of Mau Mau. In 1953 Dedan Keemathi became the leader of Mau Mau and got arrested and hanged in 1956. That year, nearly 2000 whites and 11000 Kenyans got killed. However, most of the people died due to starvation and diseases that were spread throughout the fortified villages of Kenya.
After the long lasting struggle of the Kenyan people, British was forced to leave their motherland Kenya that became an independent state in 1953 with Jomo Kenyatta as its president.

The book starts from the childhood of Njoroge, the first person to go to school from his family. Njoroge lives in a village in Kenya with his father, who has two wives-Nyokabi and Njeri. Njoroge has three brothers, Boro, Kamau, Kori and Mwangi. The later among them dies fighting alongside British in World War II. Boro- a fighter, survives World War II while Kamau and Kori work to earn for their family. Njoroge alone enjoys going to school by sharing the same pathway with his love, Mwihaki-the daughter of Jacob (a Black chief who supports colonial government). Njoroge believes the fate of Kenya can only be changed by education and prayers. However, Nogotho wants to own his father’s land that are occupied by the white man, Mr.Howlands. The people of Kenya work unhappily and earn low wages under British rule. They, therefore, join together to strike against low wages for their labor. Unfortunately, the strike turns violent and people begin to lose jobs. The people of Kenya, all the while, remain optimistic that Jomo Kenyatta shall win the trial against British in court and Kenya may be free but, unfortunately, he loses the trial and gets imprisonment. This worsens the situation of Kenya and a violent uprising begins to take place in the shape of Mau Mau- an organized group of freedom fighters. Just at this point, Jacob makes Mr. Howlands believe that Nogotho’s family is the main reason behind the awake of Mau Mau. Resultantly, Jacob arrests his two wives and Kamau. With the passage of time, the members of Mau Mau kill Jacob. This results in abduction of Njoroge from his school. He is tortured in custody and asked insane questions the answers of which he knew not. As a responsible father, Nogotho goes to Mr. Howlands and tells him, he is the man who killed Jacob. This, however, is a false claim to save the family. Njoroge and his mothers are released after days of torture while his father spends his days and nights in a cell being tortured consistently. The white men release him after they know he is not in a state to recover. The father dies as expected. Boro promises to take vengeance of his father’s death which he fulfills by killing Mr. Howlands. He gets arrested by the guards afterwards. Nogotho and Mwihaki spend the rest of their lives waiting for a new sunshine to raise and a new tomorrow to come.

The novel expresses a lot of grief, family responsibility, love, education, violence, dignity, social racism, land and freedom. There can be found a love story between Njoroge and Mwihaki but there is family responsibility too on the other side so they choose not to leave their families. In addition, the land is the most observatory topic seen in the novel as everything that happens is due to land and for land.

Nogotho claims the land to be his father’s and wishes to have it back while Mr.Howlands believes the land is his as it was the land that made him wealthy. While this looks very inappropriate to youngsters who feel like servants in their own lands that is why they decide to fight for it in order to achieve what is theirs. In other words, violence is another trajectory that is often felt in the story that the Blacks suffer from the white. They make them work and then pay them with low wages. They often beat them and torture them when they ask for their rights. Besides, racism is another trend that can be seen by having whites as the masters and blacks as their slaves. After all this, freedom is the only solution to all the sufferings that can be observed in the story. The sacrifices and struggle of the Kenyan people, however, do not go vain as Kenya finally gets liberated from British in 1964. The novel also integrates the ideology of nationalism and its story can be reflected to the current situation of Baluchistan. I, personally found this book enjoying and interesting and I consider it a must read piece.