Home Articles Who do you write for…? 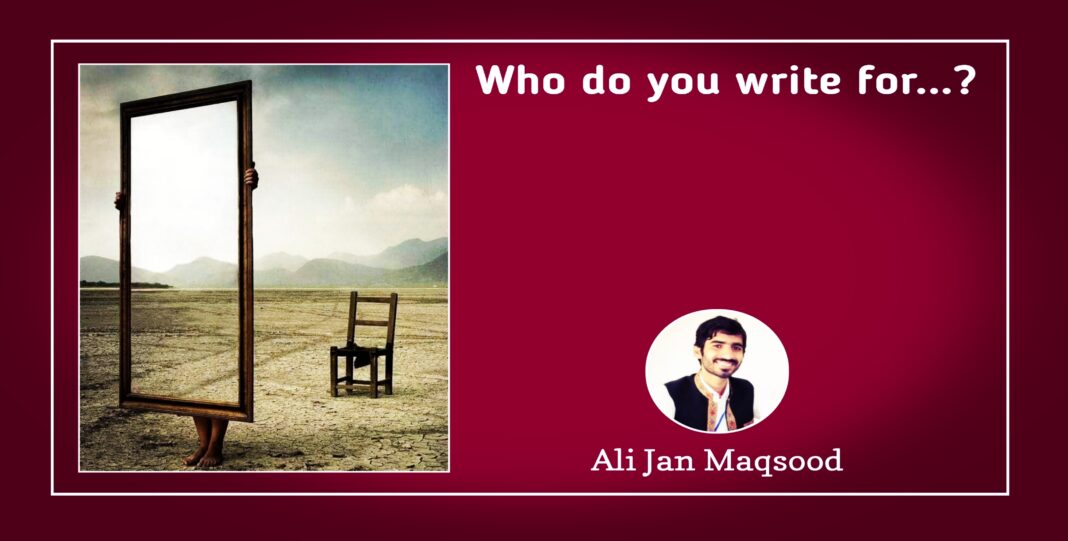 A few days earlier I received an email from an unknown sender posing a question; “Who do you write for?” I was dumbstruck to what sort of a question was that, but I really felt the question the very next moment. I began thinking of an appropriate answer and kept asking myself “Who do I write for?”

Balochistan is definitely the land of dilemmatic problems. Sometimes when the pains exceed, we get compelled to note down the societal grievances and sometimes the ink gets finished to go further. “But who do you want to read your articles?” the sender emphasized more in the next email.

And then eventually I realized, do the ones [I want to read me] know enough English to read what I write? And I got an answer as, maybe not. I write for traditional members of my land (who are mostly illiterate), but…..! “If you know they cannot read you, why do you write?” The sender counterattacks.

But then I felt, not every time I write for the traditional members of my society, but I, to boot, focus on the literate youths of my society to be very supportive towards the women and their rights. But then I received the question back, “Don’t you know your most so-called ‘literate’ societal males [some of literate members are termed as social activists as well] are themselves the violaters of the rights of women?” I know they are, but not everyone, I reply.

As writers and journalists, we try to highlight what wrongdoings we find around us to limited extents. The sender still seemed unsatisfied with my responses. Again I got an email asking, “Who do you really write for and who do you want to read you?”

“Sorry sir. You are still not sure who you really want to write for and who you want to read you.” The last mail I received. It has been a couple of days I am not receiving anything new from the given sender. Maybe the anonymous sender felt I never thought of who I really write for before I write anything for anyone, but I do. Above all, I still felt I lacked something as a writer.

The very next day, I received an email from a young man. “Hello sir, can you plese write my story, too, of how ill my society treats me due to my caste; a caste which I did not choose myself with birth?” One more story of another Baloch. But who do I want to read his story of my description? Will his society mates get to read what he wants them to read through me?

I took my pen and notebook to write his story, but the question from the unrecognized email sender appeared after which I kept my notebook and pen aside for a while. But suddenly I realized how come he [the new email sender asking me to write his story] knew I was writing stories of suppressed fellow mates! It meant my writing was reaching to the Baloch society_ in either way.

I write for my people. My readers may not be who I want for the particular story, but there is always another person who reads my story of a like incident. It may not reach to the person of the given case, but definitely rings around to saving another story. I took the pen and notebook and went on and on. The story goes on….!