Home Articles Disbelief of public vs confused policies of Government 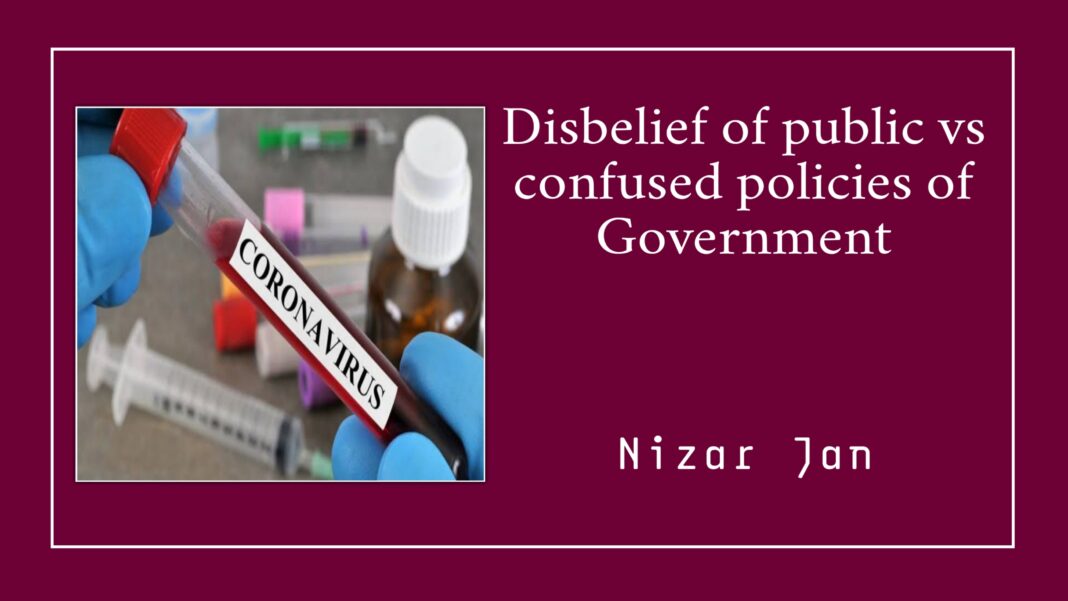 Sorry may work when a mistake is made, but not when trust is broken. Since forgiving is easy but forgetting and trusting again sometimes becomes impossible. As the government is in the state of confusion to combat the Covid-19, there is a conflict in speeches of the governmental officials. Here is what the Prime Minister said, “There is no confusion in our Covid-19 policy and we have plenty of data.”

Though he was against the lockdown and stated that provincial government imposed lockdown without the confidence of federal government. And the recent speech of his National Assembly declaring Osama Bin laden martyred. These all are the words of his ill speeches. He does not know when a country’s Prime Minister speaks in parliament, with the eyes of the world on him, there is very little room for error and words must be told carefully. But he hardly ever cares.

In the similar fashion, once the restrictions were relaxed, markets were reopened, and the most economic activities resumed, people tented to assume that Covid -19 was no more a deadly virus but a simple flu. A huge distrust had got started between the people and government due to the spread of misinformation, of fears, rumors, and false facts were initially rife throughout social media.

However, many believe that the State itself is doubling the figure in order to get aid from abroad as it signed 1.5 billion dollars loans agreement with three international financial institutions including World Bank, Asian Development Bank and Asian Infrastructure Investment Bank each of IFI has provided 500 million facility.

Moreover, due to these financial aids some believe that the virus was imported in Pakistan in order to get aid. However, whenever Iran was hit by the pandemic, government still did not close the Taftan border. Neither they put strict restrictions nor asked the public to follow SOPs until some cases were reported.

Similarly, easing the lockdown in Eid-ul-Fitr was illogical, and transportations were allowed to ply on the roads, the pandemic was helped little a bit to hit each and every corner of the country. That is why today they do not follow the Sops. Neither do they believe in doctors nor the government. They escape from the hospitals even though they find the symptoms. They are in self isolation where they lack proper care and medical treatment. They think if they visit the hospitals, doctors will kill them by lethal injection in order to control the virus. It will not be an exaggeration to say that, the disbelief of public has its roots in the government’s unclear statements from the very beginning.

Similarly, due to lethargic lockdown, pseudo policies of government, lack of coordination between government and people, neglecting one room one person policy, lack of clean bathrooms, drinking water and ranked Pakistan the 13th most affected country in the world, but the government’s public messaging and decision making have yet to assume a clear direction. Sorry to say, they are yet to come out with a unified statement and an orderly policy to inform, educate, and protect the masses.

A section of society, mostly under the influence of religious propagandists, believes that COVID-19 is a conspiracy produced by non-Muslims to keep believers from worshiping at mosques and following their religion. Similar misinformation surrounds the polio virus propaganda that the polio vaccine is a ploy to make Muslim men infertile is one of the major reasons that polio still exists in Pakistan. Even among those who accept the existence of coronavirus, some are under the impression that the virus cannot touch Muslims. There is a narrative that the disease is God’s wrath against the infidels for their immorality. This section of the society, again under influence from religious propaganda, believes that Muslims are immune to COVID-19 because they wash their hands and faces five times a day while performing ablution before each prayer. People should not forget, Covid-19 is a disease which can attack any human being regardless of his color, religion and caste. It could be much better to remove the misconceptions and be far away from the misinformation that you are trapped in.

Thus, building trust should be the foremost priority of Government, restrictions should be put on freedom of movement regardless of their social or economic status. Everybody should have access to the health care they need regardless of their race, color and caste. Because International Law permits certain restrictions on freedom of movement including for reasons of security and national emergency like health emergencies on free movement should be strictly necessary for that purpose, proportionate and non-discriminatory.