Home Articles Sin of being a daughter? 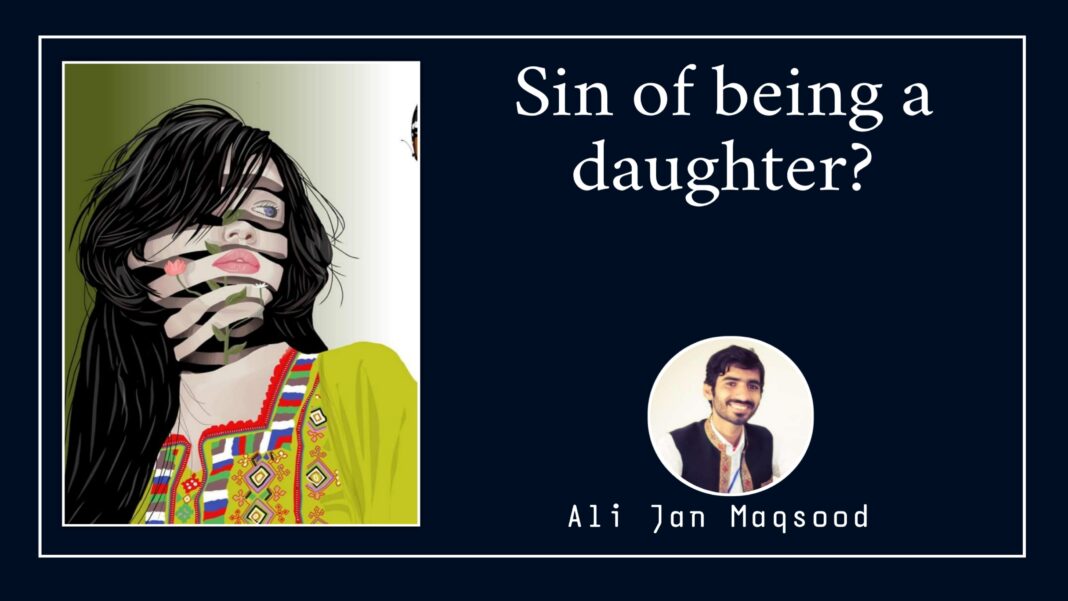 The 9 year-old Droshum wished to get education when her father bought the bridal dress for her. Her other two brothers were sent to city for further education, but she was kept afar given the duty to sew her matrimonial dress. She vociferated for a pen and a book, but all in vain. Her family ignored her words giving her examples of girls of their ancestors. Education is never meant for girls, they say. She confronts the moon in nights, folds her both hands together in anguish, cries her heart out and talks to moon of her wishes_ the incomplete wishes.

Child marriage is a grieved issue in Balochistan for decades. In the modernized era, it disturbs the constitutional right of women to getting education. Besides education, it affects badly the health of young brides and grooms. Bearing the pressures in this very age enhances the given troubles for the couple. Early pregnancy also results in death of young girls. Above all, it kills all the desires a girl keeps in mind. Since, after the wedding, girls ought to obey their in-laws.

“My childhood usually rings in my mind. When I was very young, I was keen to getting education and becoming a lawyer, but all in vain, ” says Droshum giving a glance at her past. “I told my wish to my father a day earlier when he handed me over the bridal dress instead of a pen and book. My brothers never wanted to study, but they were forced to go to school and I….” she stammered trying to collect all her courage together.

Why is it so when someone [a girl] is so desperete to study but is lifted to marriage in our society? Why cannot a girl share the same rights as boys do? Why are girls kept afar from their desired futures? Despite knowing the fact that girls can perform better, why are they not given the due chances they need to rise up? Is it all because they are daughters?

“I was only 9 years old when they wedded me_ just 9 years. Who does so with their own children?” she wept for minutes before getting back to normal. “Allah knows how hard it was for me. Time was crucifying me every second I was sitting as a bride there. I was mourning and my family…. they were dancing. How unlucky I was!”

How can a child bear the very complicated and solemn relationship of marriage when so young? Didn’t her parents feel a little pity on her before wedding her so early? Is it her sin born as a daughter? Can parents be this cruel to their innocent girl children? Could not they feel what their daughter was going through at that very moment? Isn’t it against Islam and humanity?

“I learnt with time life had killing challenges for me each day. I did not know who to complain for and to whom.” she explained wondering deeply in her thoughts. “My own shadow had burnt me, what else could I expect from others? I was burning everyday and no one cared_ literally no one ever has asked me what I have been going through.”

Unfortunate for most girls, they never know who to complain to when they face any unfavored challenge. Since, their own family causes them face dilemmatic worries. It sometimes although results the girls to commiting suicide or skipping from their homes. And if she runs, she is later on murdered in the name of ‘honor’. On both sides, it is the girls to bear the consequences.

“When I was just 10, I was pregnant. Delivering a child in that very age was the toughest of all the happenings of my life, ” she says pointing out at her 3 year-old son. “Doctor scolded my parents for wedding me so early. He told them it were all on Allah if I could survive from this dangerous delivery case. They all had lost their hopes for my survival, but God had different plans for me. I survived and gave birth to a baby boy.”

Droshum had many complaints to Allah. She used to share her complaints to God sitting in front of the moon in the first few months of her married life. But she ceased complaining when she got used to the pains and made moon her partner. She had embraced as much pain in life that pain no longer pained her. Under those situations, she had learnt to smile, thankfully.

Till date, when she sees the girls going to schools, she remembers her childhood (despite being a child herself). She says she feels happy the people have little learnt to send their daughters to schools. She, on the other hand, gets saddened when she eyes girls getting marriage in their early days. She feels what pains a girl goes through when wedded early.

Last but not least, not only Balochistan but the other parts of the state are also affected with the curse of early marriages. When we say “daughter” they hear “burden”. Even though females have more potentials than males, they are neglected. They have better leadership qualities which is proved over and again, but they are always downtrodden. It is maybe they carry with them the title of “daughter”.

We need to curb the culture of early marriages in Balochistan. They [daughters] have faced enough challenges in every sphere of life. It is high time they were given some more space to breathe openly. They deserve more for they have more responsibilities on their shoulders. Having a daughter is your luck and pulchritude, not sin. Be thankful when you have a daughter.