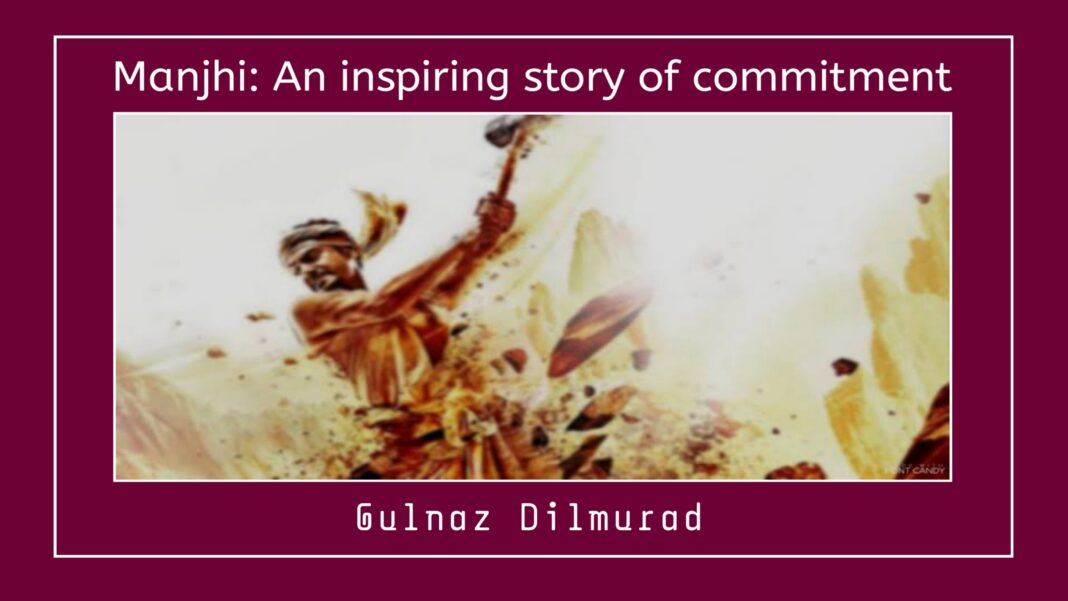 There are different kinds of movies that we watch everyday. Every movie has its own massage to provide to the public and give best of their knowledge about their movies. Some movies are motivational, some are funny with full of comedy and entertainment: some are social movies related to our society, whereas, some are based on real life-based stories.

In short, every movie has something unique in it. Therefore, whenever you watch a movie, try to understand the main theme, like what the movie is trying to tell you. There is always something good to experience in every new thing.

Recently, I came across an Indian movie which gave me the massage and helped me out to making new things happen in life. It is “Manjhi; the mountain man” which I love to a great extent. Because this movie is full of motivations which inspired me very deeply. It changed my mindset that no matter how tough the things are and how bad your life is going, just try not to give up. Whatever you do, which is not just good for you but also for all people around you, continue doing it.

Basically, the movie is based on the true story of Dashrath Manjhi who craved a mountain alone by just using a hammar and chisel.

The movie was directed by Ketan Mehta, a very well known director in Bollywood, India, and the lead roles were played by Nawazuddin Siddiqui as Dashrath Manjhi and Radika Apte as Dashrath’s wife. It was released on August 21, 2015, and got very positive comments by audience.

The very near village to Manjhi’s village was Wazirgang which was 4 miles away from Gehlaur, but due to the mountain it took 40 miles to reach there. The mountain was too big that it was not easy for local people to cross it directly.

Life kept going on for them. One day when his wife was taking food for him, she slept while crossing the mountain and fell down. Manjhi took her to the nearest hospital (which was far) but unfortunately, she lost her life. She was pregnant for her second child when accident had happened. Luckily, her daughter was saved, but she could not survive.

They both were living a very happy life but this accident completely changed Manjhi’s life. He got alone by then. It was the hardest time for Manjhi who lost his beloved wife.

The very saddening incident motivated him to crave the mountain and make a road through it. Because he did not want anyone else to lose their beloveds due to it. He had nothing but a hammer and chisel. When he started craving, people laughed at him. Nobody supported him_ not even the government. But he did not stop and continued his work.

With this part of the movie, I learnt that tough situations are part of our lives. If we confront any such situation, it does not mean to stop there, but move ahead. Because it is you who can make a difference. Even craving a mountain is not tough when you have all the courage and positive energy in you. However, it may take much time, but giving up must never be an option for you.

Everything will be alright with the passage of time. Happiness will come back. Make a goal in your life and try to achieve it. Make yourself busy with doing such things which help you and your closest ones.

Similarly, it took Manjhi twenty two years to make a road through the mountains. In this duration, Manjhi faced a lot of troubles and hardships, but his belief was firm which lifted him to succeed. He ended up successfully what he had started.

With this movie, we learn that we should have a strong belief on ourselves. Do not focus much on what negative others tell you. If you are doing good things, continue it. It is a bitter fact that people will laugh at you. They may even call you lunatic, psycho or anything else, but let them say. They say it because they themselves have not learnt the art of doing anything new.

When Manjhi was completed with his work, it got famous among all. People gradually started to know him. He created a history, a history which was never done before. Most specially, when the movie was made people were more eager to know him and his work. In the current time, people from different parts of the world know him and appreciate what he did.

Lastly, I ask you to keep one thing in your mind, people may not recognize what you have started but they will recognize what you will end up with. It is one of the most beautiful movies I have ever watched. After this movie, I got to recognize my potentials to doing anything I really want to. So, I ask everyone to watch the movie and get to know how the power of commitment can make a difference in your life.