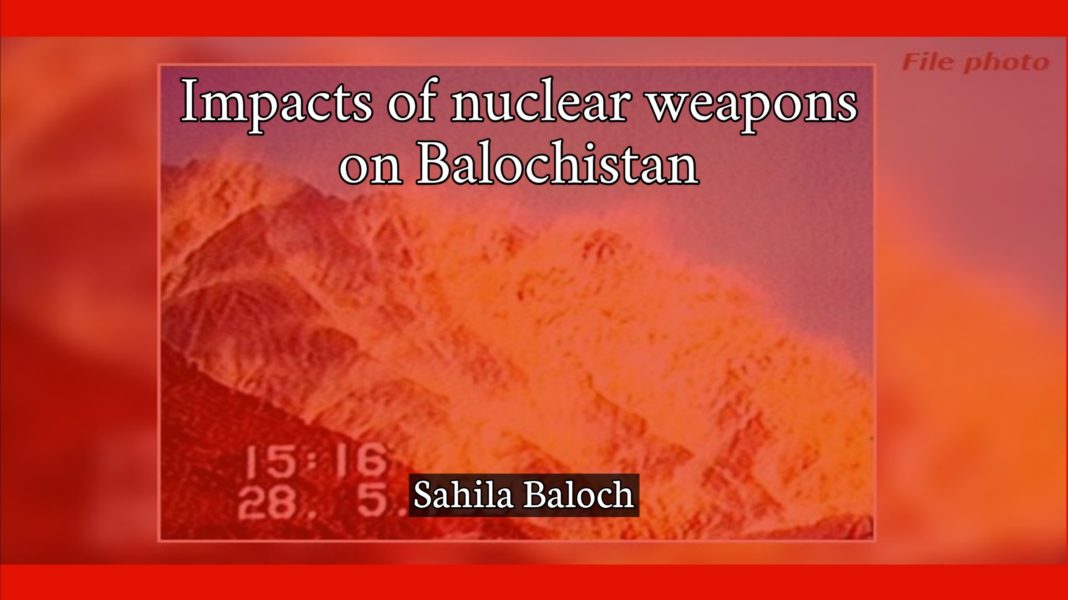 Pakistan conducted a series of nuclear tests on May 28, 1998, in Chaghi Balochistan, the eastern part of the country. This day_ to the Pakistani population_ is a glorious victory. They proudly celebrate this day. But, the people of Balochistan consider it a ‘black day’ for a great many reasons.

Firstly, Pakistan tested its weapons on a populated area of Balochistan named Ras Koh district Chaghi which has been affecting the local people till date. They could choose a desert and uninhabited area for at least saving the lives of the area.

The locals still suffer as a result of the nuclear explosions the Pakistani government set off in Ras Koh mountains twenty two years back.

Unfortunately, this nuclear bomb testing brought disastrous and negative impacts on Baloch generation of Chaghi. As a result of this blast, children are born with genetic problems such as facial deformities, eye problems, skin diseases, limb dysfunctions and suffering from the thalassemia and hepatitis.

The new generation of Baloch inhabitants in the region is distressed with serious diseases due to those blasts. When they ( the Nawaz government) intended to test the weapons, they promised to provide a better health, education and infrastructure to the province_ particularly Chaghi_ but we still do not see any fulfillment of a single promise.

Pakistan has always treated Balochistan as Scapegoat (Bali ka Bakra). The government did not give anything in return but snatched the lives of many people including their happy-to-go-childhood days.

In fact, Baloch were never happy with the decision of testing the nuclear weapons_ that too in the populated area_ but no one listened to the vociferations of the Baloch. They have always ignored the Baloch people doing all the cruelties on them only.

On the other hand, the people of Chaghi, who were living a happy life, are compelled to migrate for a better shelter in any other part of the province so that they get to overcome the dangerous effects of the nuclear weapons on their generation someday. But, what about the poor residents who do not afford to come to the main city of Chaghi for a simple treatment? Where would they go?

Baloch, like always, are compelled to live miserably on their own land. It is high time change had come. In such circumstance of life, what else should the Baloch do?