Home Articles Online Classes: A litany of Injustices to the Baloch 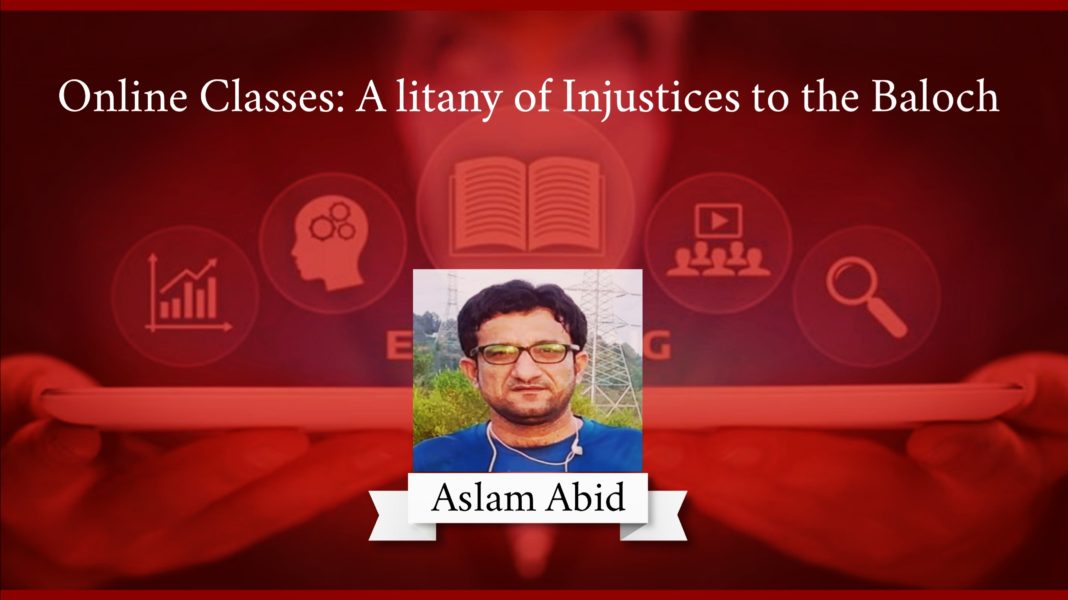 Why highly educated, intellectually sound and brilliant young Baloch are picking up guns and dropping their pens? Why thousands of educated and bright young Baloch are wandering in self-exile across the globe?

The answers to these questions are evident to a layman, that have historical roots as well as are the results of wrong and myopic policies of the state.

Balochistan, despite its huge natural resources and strategically and economically significant position of its deep sea port, is the most backward region in terms of all indicators, including the basic infrastructures, health, education, economic and social well-being of the people and other social services. Since decades the province has been economically expoloied, politically alienated, socially marginalized and educationally deprived. Most notably, the use of force to squelch voices of the Baloch who had raised for their rights, has featured prominently in the policies of all the successive governments including the establishment.

This colonized and authoritarian way of governing and controlling the province has not only hurt the Baloch econimically and relegated socially but also wounded emotionally and traumatized psychologically. It has caused simmering resentment and hatred among them against the ruling elites. Presently, a deep sense of deprivation runs in the province.
Ironically, the state’s coercive and brutal policies, despite their disastrous consequences, are continued unabated.

Rather than accommodating the emerging voices and articulating the long-standing grievances of the Baloch, the state is bent on further alienating and marginalizing the province. The people of Balochistan have not only been deprived of the fruits of its enormous resources but also have been denied to have a say in the political, economic, security and administrative affairs of the Province. The recent appointment of Javaid Jabbar from Sindh as Balochistan’s representative in the distribution of NFC award is a case in point.

Sadly, another shockingly excruciating fact is that Crona testing is only available in One district (Quetta) out of 34 districts of the province. Worse, This testing rate is dispairingly at a snail’s pace. However, there are other plethora of such glaring examples of injustices done to the province. But here I limit my write-up about the lack of internet services in Balochistan particularly in those districts which are comprised of the Baloch.

The 21 century is the age of technology and the internet is the part and parcel of modern education.The Internet enables a person to have access to an abundance of high quality and up-to-date literature in form of books, websites, journals, encyclopedia, magazines, video/audio lectures, seminars and conferences.
But Unfortunately, in the 21 century the Baloch have been deprived of the internet facility. With the exception of two districts out of 25 districts of Balochistan dominated by the Baloch do not have the inernet services.

Even though most of the areas of the province do not ha ve Cellular and PTCL networks and phone services.Those areas where mobile services are available but there 3G/4G are banned. We are not only totally disconnected from the world but also from other parts of the country. Because we do not have any sources of communication and information. Given such highly backwardness of the province and lack of cellular services, let alone the inernet, the announcement of online classes by HEC’s Chairman is a deliberate attempt to deprive the baloch students of education and darken their future. Such move would further alienate and push away hundreds of Bright educated Baloch youth. It would add insult to the wounds of the already disgruntled Baloch. Thus, HEC chairman should find an alternative to save future and career of the Baloch youth.

ABOUT US
The Baloch News is an online newspaper that provides you with the latest news stories, articles and infotainment straight from Balochistan.
Contact us: edit[email protected]
FOLLOW US
© 2018 - The Baloch News | All Right Reserved
error: Content is protected !!