Home Articles A conversation with Kulsoom Baloch on feminism 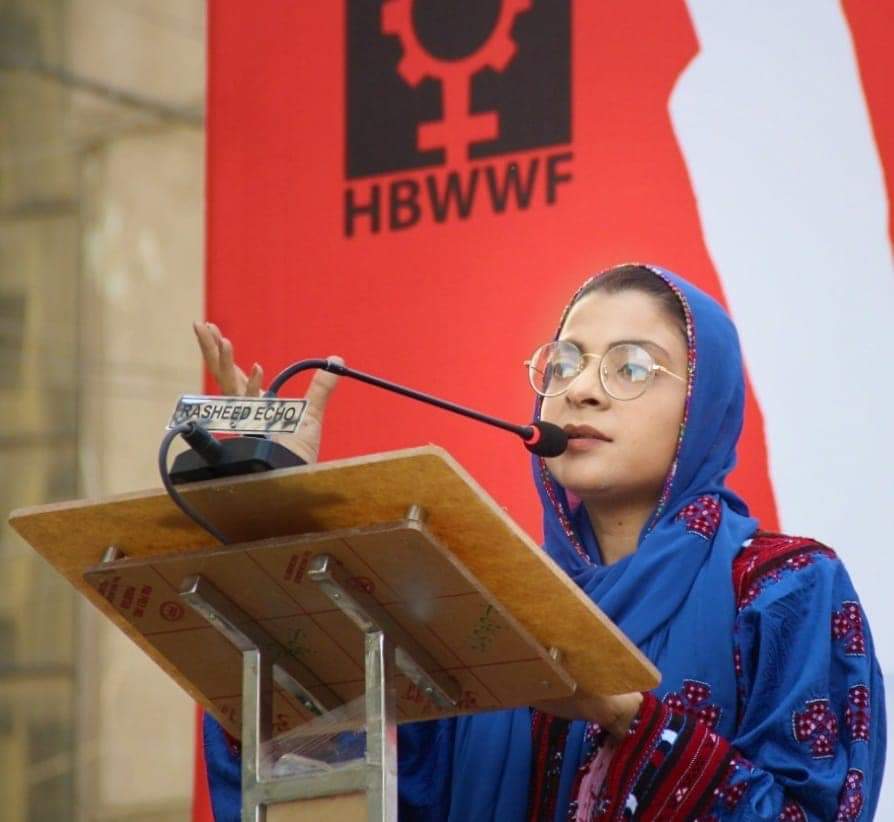 Kulsoom Baloch is from Pasni Balochistan, a vocal and active advocate for Human rights, focusing on youth and students’ rights. She has done her Master in “Plant Sciences” from Sardar Bahadur Khan Women University Quetta. She is currently pursuing her M.Phil from Botany Department, (Specialization in Plant physiology) in University of Karachi. She started her activism as being one of the active members of Baloch education rights based organization in Karachi University.

She joined Democratic Student Federation (DSF) in 2018 and elected as president in 2019. Kulsoom took an initiative of bringing all the political student bodies working in University of Karachi under the umbrella of “Talbah Itehad Karachi”. She is a writer and strong advocate of women’s issues in general and harassment issues in particular.

The Baloch News presents her exclusive conversation on her activism.

BN: What do u understand by feminism?

Kulsoom: For me Feminism is the movement or a struggle of equality for social, political and economic aspects among sexes. Though this movement is originating in the West but manifested worldwide and I believe our patriarchal, fundamentalist societies need it to confront feminism for the acceptance of women’s rights and interests.

BN: Why is it important to promote feminism?

Kulsoom: Promoting gender equality is a movement that people are focusing on around the globe for better, productive world. As a woman from oppressed society we have witnessed and faced such discrimination from our surrounding to educational institutes in different forms. Though might you be wondering what just one individual can do? Unfortunately, it is likely that you have either witnessed gender inequality or even been a victim. It is frustrating, and can be really hard to cope with but the good news is people in Pakistan taking their stance over this gender issue, so we can make a change. Now we can notice that people have started listening to women.

BN: How did u get attracted towards it?

Kulsoom: We all are facing gender issues on daily basis, thus my struggle of observation regarding gender motivated me to write and raise voice for women because we deserve more.

BN: Is it possible that the cultural and traditional norms go side by side with feminism?

Kulsoom: Culture and traditions never remain same because they need to be in process for change and updates, according to the requirements of time; we have a history of cultural change. I know it is a slow process and hard to confront in this fast globalization but it can be possible if we try to educate our people for equality.

BN: Female participation in political and social activism in Balochistan is low. What could be the major reasons?

Kulsoom: There are so many reasons due to which women are avoiding mainstream politics and activism and it is really difficult for the women to find a space in mainstream to practice activism and politics in this male-dominated society. We have cultural boundaries specific for women. Women are deprived of basic education due to which most of them are unaware about their basic rights. Our Baloch women do politics for personal profiling and personal objectives.

BN: In recent past, Baloch female political activists equally participated in activities, but they were pushed to the walls. How do you analyze it?

Kulsoom: Well this happened because of disunity and ideological biasness which segregated and countered that progressive movement. It is never easy to do social and political activism among oppressed nations.

BN: It is a general concept among the critics that the feminists and socialists remain active so that NGOS and other organizations offer them projects that’s why critics believe such feminists, human right activists, and socialists are not reliable. What is your viewpoint on such criticism?

Kulsoom: Well this objection is also from my side as well, so I don’t defend it. We have seen most of the famous feminists in Pakistan are over-fastidious regarding this women question. They are claiming but also avoiding women from oppressed nations. However, this feminist movement has changed to elite feminism in Pakistan without parameters, due to that this movement is becoming diluted while working class women and women from deprived backgrounds are still suffering and standing there. This feminist movement has brought significant changes in most parts of the world, but unfortunately in Pakistan we have failed to create that movement because of so many biasness. We women should play our role to motivate and uplift each other for betterment.