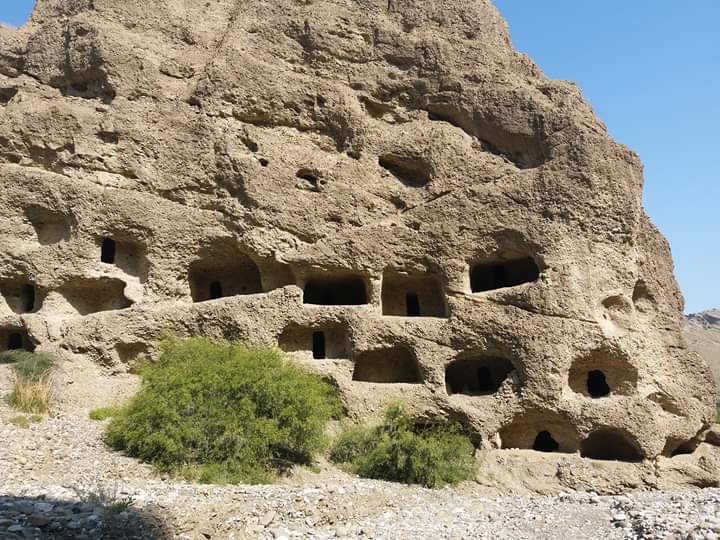 On the way from Quetta to Karachi, a small hotel will come to your right hand somehow twenty to twenty five kilometers before Bella City, where located a turning round, called MahiPeer cross. From here, a road goes to west, take this road and start driving very straight from it and approximately about ten to fifteen minutes drive you need to turn to the south side. From here, there begins a rough and rocky path. That road, however, will lead you to a mysterious place that would be a unique experience for you as a part of your explorations. This area with constructed caves like small lofty rooms between the mountains is called the Cave City.

Two years ago, along with some friends i had explored it but for our beloved Najeeb Sair this was entirely an undiscovered place.

So we reached there under the supervision of Khalil Ronjo. Noor Jatak and his restraining matter of job restrained it with us for longer.

As you descend from the main highway, there the path continuously welcomes you with a scattered and constant population ahead. However It is a nomadic and outskirts population. The exactly real and undefined population of poverty-stricken Balochistan will be seen located at middle of the hills. Just on the next circled turn as you move forward there on the south you take to the rough and rocky path, where children wearing old and torned clothes rush to your car from the wretched tents to ask for something. Try to carry fruit, toffee or something else that would be eatable while you intend to go towards that way, Instead of giving money to children, it would be better to give them something to eat.

There are two separated paths to reach to the Cave City from here. If you have a perfect car and a well-trained driver, you can also select the raod just below from it and that leads you straight up the hill.

However the path situated in downward, there the water of the springs flows, which fluctuates seasonally in a capacity of drainage into more and less. The Bike-riders often take riding through that route, even families who come for picnics try to get the ways from this route because the other path leading to the site is a bit tricky and perturbing. However, the vehicle is safe to drive on this road.

This rough and rocky path will end at exactly straight to the mountain. Now you have to leave the car there and come down the hill. It’s also a very good and energetic exercise and sometimes it is an act that make you exhausted and fatigued.

While leaning down from the rocky mountainous region, it requires to cross the spring and walk somehow one kilometer on foot and you find out and reach to a marvelous and outstanding part of the mountains known as the Cave City.

There are hills on the both sides of it, and between them there are intricately and polished carved nests’ like caves. The area of the caves stretches for two to three kilometers.

Previously just owing to a healthy friends’ becoming abruptly tired and exhausted we were forced back from the initiating steps. This time with the young engertic men went far away particularly.

While capturing photographs we came acroos to meet a local teenager. As he was asked, he told that the area stretches for another one to two kilometers, where it is followed by smaller populations as well.

This is astonishing, the books related to Balochistans’ history and archaeological sites, I have yet read or came across to my sight,  from them a single book I couldn’t find describing the interesting and outstanding place mentioned above.

However there isn’t any reference available in any such books regarding the place name and also why it has been called the city of caves.

Today most of the historians are accustomed to sit at the home calm and take the benefits from various books and internet while they start writing about something. This is why the historically blessed island and asset of Balochistan is still undiscovered. There it has a story of it’s every rocky and mountainous part, God may knows better, when we will be eligible to read the stories of our ancestors and let the world be appeased of it.

These nesting cave are specially crafted. It seems as if these crafted structures once used to be the means of passing paths. It is also possible that a soldier might has to stay here for a long time and has made these nests for a temporary halt and purpose.

If there was such a historic place in a decent and civilized region, the government would have declared it a national heritage and asset. Even today, if only an accessible road and a public park be made It would also turn to be a source of good generating income for the government and an appreciable work to be praised. But our government is virtually lenient in its ability to earn a good name and status, so any such hope will be absurdly fruitless.

However, after walking on foot two or three kilometers via the rocky paths, we were pretty tired and exhausted.

while moving ahead to cross the fountains, my socks get entirely soaked that i hung on a branch of tree with an idea that I would pick it up when we return back but forgot to recalled just because of the fatigued and tiredness.

Continuously taking photographs on our return via the route, Najib Sair found a rapper on which it was written: “Wi-Fi baij”.

The world is enjoying Wi-Fi in space, our people are using hardly to spend the time using Wi-Fi in these mountains.

From here we bide goodbye to our host Khalil Ronjo. He went out to his field in his area. We came out of the Empire of Jam, complaining on his political seriousness and laziness and moved towards shaal intended a hope of an excellence journey.