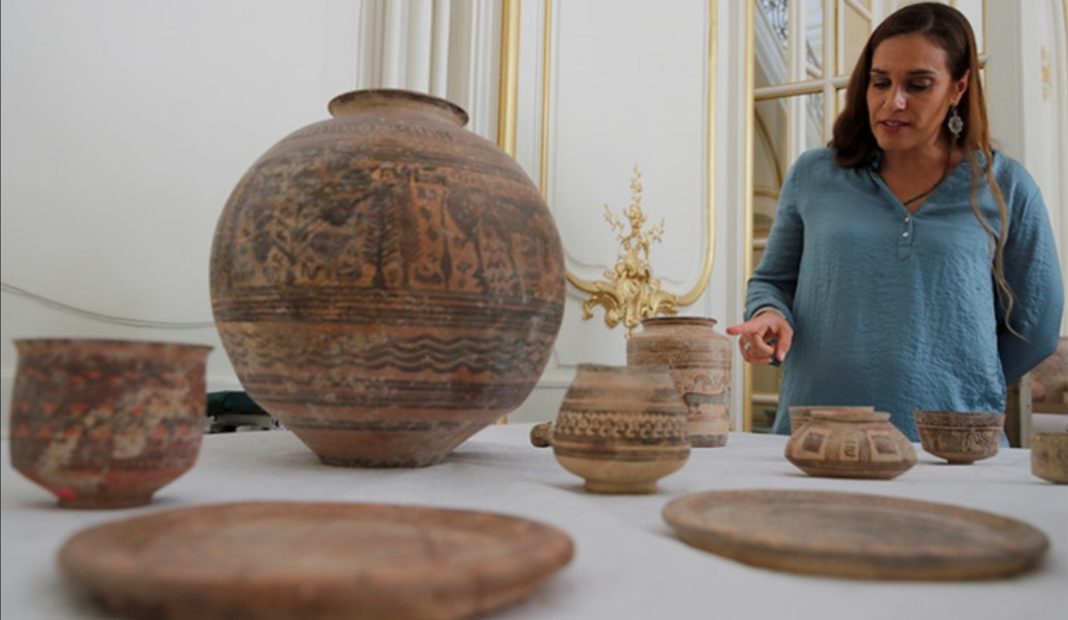 Paris: France on Tuesday handed over to Pakistan nearly 450 ancient relics, some dating as far back as 4,000 BC, seized by French customs agents over a decade ago.

Customs agents at Paris’ Charles de Gaulle airport in 2006 intercepted a parcel from Pakistan containing 17 terracotta pots addressed to a museum in the city, claiming they were more than 100 years old.

But an expert who examined them concluded they were artefacts dating back to the second or third millennium BC which had likely been stolen from burial sites in Baluchistan, a province in southwest Pakistan.

Following an extensive investigation which lasted almost a year and involved a raid on the Paris gallery, investigators found a total of 445 items, some dating as far back as 4,000 BC, with an estimated value of 139,000 euros ($157,000).

Among the items on display at the embassy to mark the handover were a series of beautifully-decorated pots, vases and jars, all painstakingly adorned with small, stylized motifs of animals, plants and trees.

There were also about 100 tiny ceramic figurines, as well as plates, bowls, and goblets, all of which had been illegally shipped out of Pakistan for sale to dealers abroad.

“This is very, very important for us,” said Abbas Sarwar Qureshi, head of chancery at the Pakistani embassy where France’s top customs official attended a formal handover ceremony.

“Some of the items are 6,000 years old from the Mehrgarh civilization,” he told AFP, referring to an era that predates the Indus Valley civilization which flourished around 3,000 BC before mysteriously disappearing.

Aurore Didier, head of France’s archaeological mission in the Indus basin, said the ceramics came from illegally-excavated graveyards and were examples of two different cultures: the Nal (3100-2700 BC), and the Kulli (2600-1900 BC).

“For this period, very few sites have been documented and archaeologists stopped their work in Baluchistan in 2007 due to political issues in the area,” she told AFP.
Although not new or unique, they provided valuable evidence of a period where most of the remaining graves had been destroyed.

“For archaeologists, it’s very important because it’s the only evidence of funerary material from this period,” she said.
Qureshi said the 445 objects would be shipped back to Pakistan “within a few weeks,” although it was not immediately clear where they would be exhibited.