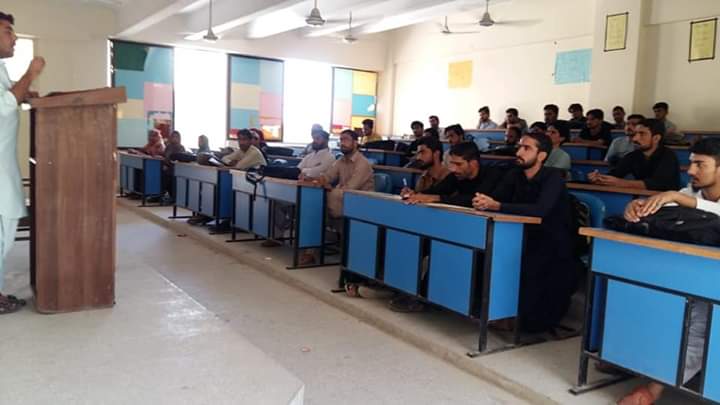 Followings are some extracts of this study circle.

Shabir Baloch said that the Oxford Advance Learners Dictionary defines the term leadership as the ability to lead. He added that different commentators had defined leadership in different words. Definitions of some of them are mentioned as below.

Marine Fold defines leadership as the process of directing people by an organization or a party under the system of management with human knowledge, character and the collection of such numberless required abilities and capabilities.

Batsna is a writer who says that the biggest characteristic of a leader is of becoming loyal to the organization, party and the nation and deliver his/her duties on that loyalty.

Stephan Hawking says that every human being has the capability of leadership, but that person him/herself has to bring forward this capability.

If we have a glance on the human history, then we can find development in those organizations or parties which had a good leadership. On the other hand, when we see a nation, an organization or party which had been on the verge of failure or has collapsed, then the main reason behind this failure is the lack of knowledge, capability and strategy in the leadership.

We have to be clear on one more point that no one is a leader by birth whether that is Vladimir Putin, Barrack Hussein Obama or others; they have gained this status by their knowledge and lots of talents and skills.

The qualities which should be present in an efficient leader are the quality of listening and effective speaking during the interpersonal communication and of having a vision and good companions of this vision.

A former US president says a that youth approaches me and say me about their wish of becoming a political leader, and I tell them not to study politics but do study philosophy, literature and history which let a person to become a good political leader.

A leadership can be a better collection of persons when they don’t become disappointed in case of failure, because every failure increases in their experiences and make an addition in the knowledge of that leadership.

Leadership is the collection of charismatic persons and under this quality it forms a group and organizes its people. The leadership has to take such decisions which would have to put positive effects on its party, organization and the nation. The credit of any success and mistake goes to the leadership.

Every person cannot be a genuine leader, but the concept of genuine leader is that the leader who is faithful, solves issues of his people by mutual relationship along with the willingness of his/her people.

In order to be a genuine leader, a person has to increase her/his personal professional skills, become self-reliance, full of knowledge, and be unselfish, courageous, faithful, and have wisdom, intuitiveness, power of decision making, enthusiasm, and have simple life style.