Home Articles What could be the future of Medical Students in Balochistan? 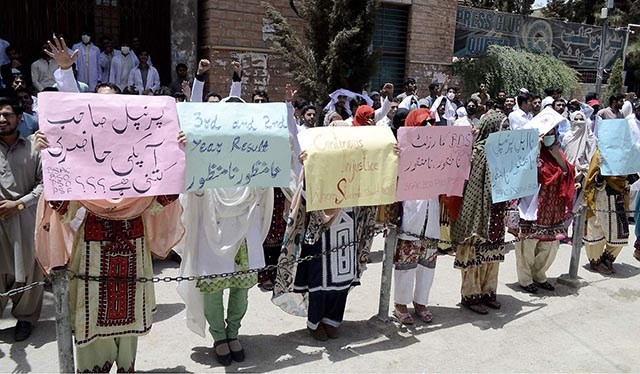 Balochistan is that province of Pakistan which lacks behind in all those spheres which are indication of progress of a region either it be health, economy or education.

Moreover, the education of the province is in a vulnerable condition where students are least valuable character of story and the educational institutions are the most prominent targets of terrorist, political parties and establishment.

And among those effected students and Institutes BMC  comes on the top of list. Bolan Medical College being the only medical college of province before 2018 is an Institute where on merit basis the topper of districts are picked and given admission. And these students are the ones on whom their parents have invested their lifetime earnings to make them compatible for the merit of BMC, but it is so disappointing to hear that for last 3 years a difference is visualized in attitudes of some departments of this Institute.

The students with most qualified merit  even are discouraged by giving them unfair results despite of their keenness and industrious attitudes towards their studies.

Every class is given 50% result in their annual examination and among the supplies half are cleared and the other half are disqualified which means 25% of class is considered failed for next class and this acquired taste is experienced only from some specific departments for last 3 years.

So ,the irony of fact is that what is the reason and what has changed in these last 3 years of the Institute that abruptly teachers have realized that their students are eligible anymore for a good result, and what are their motives behind these catastrophic results of exams and what outcome they are in prob of from the dramatic results .?

However, these steps may not contribute towards upbringing skilled doctors but surely have prevailed trends of antidepressants, sleeping pills and smoking among students.

So what could one asses the future of a doctor who is depressed and has lost his self esteem due to consecutive failures in-spite of giving his best and further cannot cope with situation if they sustain the same .

And for last 3 years there is no one  to question over this unjust behavior on students or sort out a remedy to this chronic unfair which has almost shattered the mental peace and routine of medical students of Balochistan .

The educational performance of government is already poor and literacy is in miserable conditions in the province and instead of any reforms it is further dragged towards more misery by make students the victims.

It is a decline not only of Balochistan’s education but a huge drawback for medical field of whole country.

This matter not only belongs to students of BMC since it has it’s impact on all fields related health and it is a request to all higher authorities and human rights commission of Pakistan to take notice of this issue since it is a fundamental right of every human to have a life free from torture either it is physical or psychological, but in BMC students are tortured to such extremes that for four days two of the students were on hunger strike till death against results given on a prejudice base (the students ended the strike after CM Balochistan assured them of solving their issues).

If such students take brave steps for a change than we are ought to stand with them ,till there is a change and realization towards the brutal department of BMC who has ruined our education system.