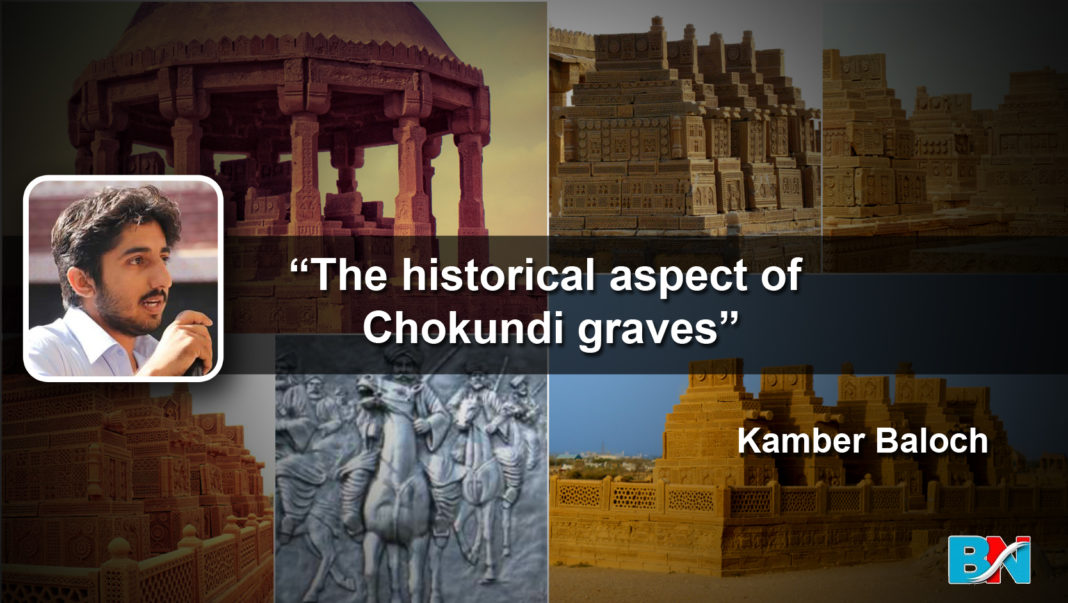 The renowned historical graves of Chokundi located at Suni Shoraan, Hub Choki, Lasbela, Malir Balochistan. Some of the graves by Chokundi are spotted in few areas of Sindh such as Karachi, Haiderabad, Meer Pur Sakaro, Sonda, Gajjo, Tharbia, Dadoo and Sewen Shareef.

Historians did many types of research and analysis over these graves. As far as chronicles records are concerned, a Historian, Henry Kinz named these graves as “CHOKUNDI”. Another historian, Mumtaz Hassan wrote that “the word ‘Chokundi’ is a combination of two Sindhi words, ‘Cho’ means ‘four’ and ‘Kund’ means ‘Corner’’. He further said that the graves having four corners are known as Chokundi.

However, this analysis is not true and cannot be generalized for all the graves, because all the graves represented by Chokundi don’t have four corners, some of them are with twelve stands, Which are still in good conditions in Malir Raziq Abad graveyard, where the graves are decorated beautifully and attractively.

In Baloch civilization, Chokundi graves have much significant importance. The maximum area of each grave in width is 2.5 feet, in length, it is 5 feet and while the height is 4 feet. However, the beautifications and decorations of the graves of Chokundi are the obvious witnesses of creativity and technical mindsets of the human in history.

After visiting the historical graves, we can say that such human creativity of past deserves appreciation. More explicitly visits the graves emerge the feeling of being in a human society with civilized residents because the decorations of the graves are very surprising and charming.

A close view over the decorations of the graves give proofs of an enormous creativeness. After visiting the graves, I came to a conclusion that human beings want to live for a long duration in order to build up some historical memories.

Many historians and Archeologists say that the stones used in Chokundi graves were brought from Tatta Sindh and some Sindhi historians say that the Chokundi graves belong to Sindhi, but this analysis lacks reliability and validity, because an observation to the nearest society of Chokundi graves make us reach to a conclusion that Baloch live and cultivate their lands around the graves since many decades; such as Malir Karachi to be given as an example.

The Malik Tuta Graveyard is in Malir’s subsurb where a population of Baloch is inhibited. There was a farming land around the graveyard which was used for the purpose of farming by the Baloch.

Another historical fact through history has been gotten that, Baloch and Sindhi have fought a war, which is a part of Baloch history and those Sindhi living near the Chokundi graves but the Graves are not being owned by them. Sindhi says about a grave in Dado Sindh that it belongs to a Baloch Sardar. They mention that this speculation about the described grave was given by their ancestors and when the ancestors/elders of the village were asked about the grave, they told that the grave is of a Baloch Sardar, namely Sardar Nod Bandag Lashari.

Many historians say that Chokundi are the graves of 17th or 18th Century. For the first time, at 1815 AD, J. Malik Waditch B.I Freri wrote a letter about the described civilization-wealth. The first researcher on this civilization-wealth is of Henry Kinz, he did his research in 1910 AD. He was the Archeology Surgical Survey Superintendent of India. In his research, Henry Kinz shows that the graves belong to Baloch.

In 1925 Kinz’s book was published, in which one chapter of the book is about Chokundi graves. After that, a member of Hindustan Civil Service G.E.L Corter visited Balochistan and Sindh.

Later, In 1910, Sir Thomas Holdich visited Malir Karachi and did a research study over the Chokundi graves. In conclusion, he stated that the graves belong to Kalmati tribe of Baloch.

In 1917 H.D Baskerville, the Assistant Collector of Tatta in Karachi carried a research study over the Chokundi graves and published a research paper.

In 1978, Dr. Zajadacz Hasternrath published a book in the German language about the Chokundi graves including 112 pictures. Dr. Zajadacz stated them as the graves of several tribes of Baloch.

To protect Baloch history and civilization, Baloch writers and researchers have to carry research on the civilization-wealth, Chokundi Graves and it also requires to be further included in the research.

The Land Mafia as far as their moves indicate, is intending to capture the graveyard’s land and level it to the earth. Sindh’s and Balochistan’s civilization is being snatched forcefully, which requires a protective concentration. The graves stones with other materials having a precious perspective are to be sold in international Market soon after owing to lack of concentrations, which could be a huge loss for the Baloch history and civilization.