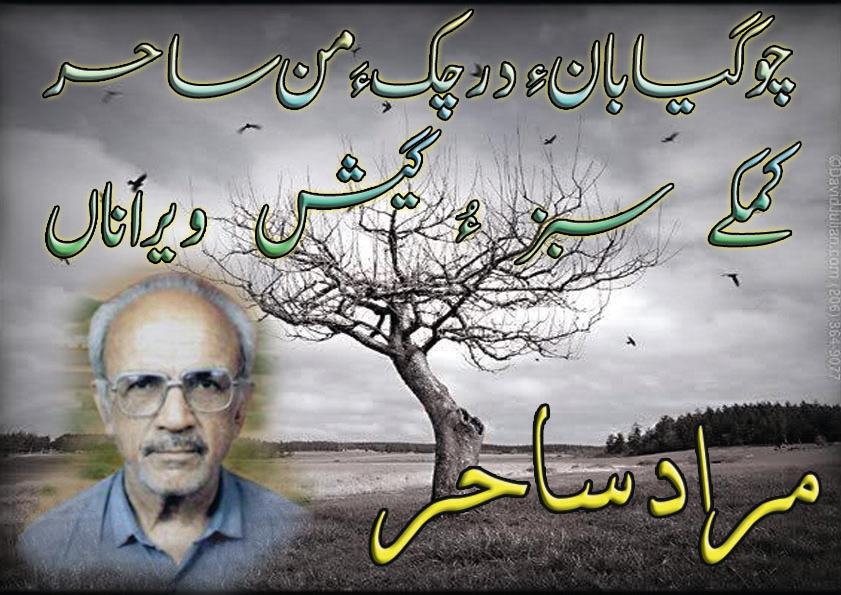 “A nation’s survival is in exploring its lost things.”

Lost things can be in shape of anything, cultural heritage, renowned people, buried reality and so on. Here is a personality with inspiring thoughts, of whom our nation is all but unaware, a person whose poetry has made him unforgettable person if someone realizes it. In fact, a poet just writes and shares his unbiased thoughts and suggestions about issues, it becomes our moral duty to read them and appreciate their works. Whenever we think they are not on right path, it again becomes our duty to make them realize about their spiritual duty.

Muraad Sahir, to me a poet who Baloch should be proud of, was born in 1927 in Shay Rangi Negwar in Seechi in the home of Mullah Rahmat. He got his basic education in his native place, and then due to famine in his area his family migrated to Karachi. They settled in Purana Gulimaar.

He was a part of Balochi literature when Mullana Khair Mohd Nadvi firstly published the first magazine of Balochi ‘Auman’. Later his short stories and poetry got published in various magazines of Balochi; his works were viewed as the beauty of the magazines, which caught and intensified the interest of readers in literature.

Once a program was conducted in Dubai on 7th of January, 1993 by Baloch Adabi Committee named “misken bega ey gon Waja Muraad Sahir a” (an awesome evening with Muraad Sahir) in which he was awarded for his everlasting contributions to Balochi Literature, which was something honorable and we should keep the same way appreciation for our spiritual poets. He had been a very committed member of Balochi karwaan, in which he never retreated to save his baseless look.

He had been a promising poet, translator, short story writer and many more in field of literature. His lovers can find his works in different magazines of Balochi. He was the founder of ‘Balochi’, a Balochi magazine, which has been contributing to Balochi literature stupendously. A reader can find him exploring his culture while reading his short stories. A reader can find him a firm fighter against social injustice and an encouraging poet while reading his poetry. He attempts to highlight the actual color of some of the people who are deceiving the unaware nation.
Some lines from his thoughts:

“If the lack of bread becomes the cause of destruction of widow and orphans, so uproot the elites of that nation. If there is no interest of reading in youth, no love for nation and awareness of world, there is no need of such youths in a nation.”

What can be more encouraging for our nation that being a mechanic/driver and working dawn to dusk for his own survival, Sahir still wrote poetry to inspire and awake his sleepy and drowsy nation? How can a person being dumped in family responsibilities, poverty-stricken and facing countless other problems still remained committed to changing his nation by his poetry? I don’t have idea about others; it really makes me feel goosebumps. No doubt, Sahir is more than our imagination, grasp, and thinking and his philosophy towards life is beyond our praise and understanding. Sorry to say we have forgotten such an inspiring poet and consider reading his works silly and waste of time. If one finds enough time to read him, he or she starts finding failings and some baseless sort of allegations to degrade his poetry or personality.

The powerful waves of poverty did the best to strike and destroy his consciousness and troubled life, but unfortunately poverty had to salute this man. The man being connected with vehicles and driving to earn livelihood, still remained aware of his nation and inspired others to be aware through his poetry.

End never comes to those who have been contributing literarily to their nation; likewise, his body cannot be seen physically, but his ideas will ceaselessly rule the heart of people whoever reads them. The man died on 19th of September, 1998 and left us physically forever.