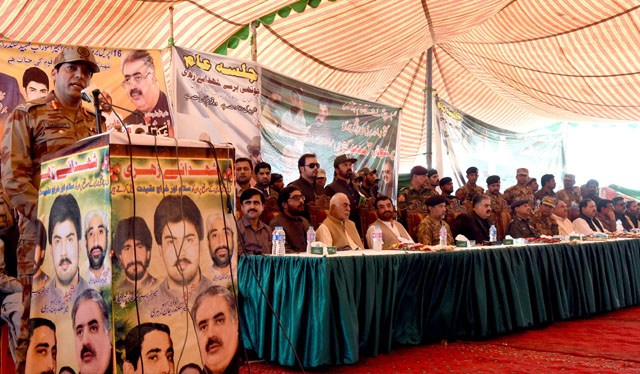 Inspector General of Frontier Corps Balochistan Major General Nadeem Anjum has said the people of Balochistan have sacrificed their lives for the creation of Pakistan and they supported and helped Mohammad Ali Jinnah in making Pakistan a sovereign state.

Addressing the public on the occasion of fourth death anniversary of Shuhda-e-Zehri, he said Baloch tribes have always stood by the side of forces in defending Pakistan.

He said some anti-state elements in Pakistan and abroad cannot tolerate the progress and stability of Pakistan that’s why they are making conspiracies against the state.

They have equipped the young generation with guns instead of giving them books and pens and provoked them to attack security forces and police, he added.

IGFC urged the people of Balochistan to help the forces so that the enemies of Pakistan could be defeated.

Major General Nadeem Anjum lauded the role of Baloch tribes for the restoration of peace in Balochistan.

He said China-Pakistan Economic Corridor (CPEC) has become a successful project and more then one hundred countries, including Russia and Iran, have shown willingness to become the part of this huge project.